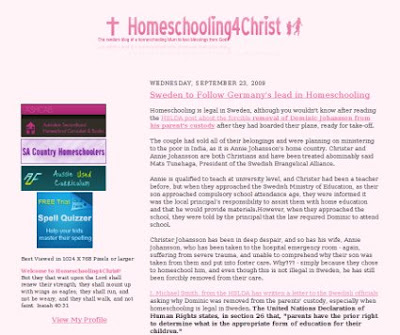 "Christer Johansson has been in deep despair, and so has his wife, Annie Johansson, who has been taken to the hospital emergency room - again, suffering from severe trauma, and unable to comprehend why their son was taken from them and put into foster care. Why??? - simply because they chose to homeschool him, and even though this is not illegal in Sweden, he has still been forcibly removed from their care..."

"The United Nations Conventions on the Rights of a Child, in Article 7 states that, "the child has the right to be cared for by his parents." Homeschooling in Sweden is legal, but you would never know - the loser's in this case are the Johanssons, but specifically a little boy called Dominic who has done nothing wrong, but who is being denied his basic human rights."
Posted by pennan at 3:46 AM