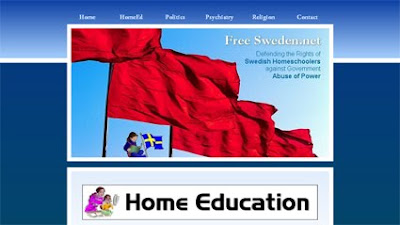 The Alliance Defense Fund, the Home School Legal Defense Association and local Swedish counsel have filed a second application on behalf of Annie and Christer Johansson to the European Court of Human Rights in Strasbourg. Nearly two years ago, as the Johansson’s and their seven year old son Domenic were on a plane ready to move to India to engage in missionary work with orphanages, Swedish police boarded their plane and took young Domenic into foster care simply for being home educated. Since that time, the family has not been allowed to use the lawyer or legal defense of their own choosing within Sweden despite no objective reason for Swedish court’s to reject this most basic of requests.

Christer, whom was arrested and imprisoned for several weeks among serious criminals without ever seeing a judge simply for taking Domenic home for one day without permission (he called the police the following day to let them know he was at his parents’ home with his son), was also forced to use a state appointed lawyer in his criminal proceedings despite having the financial resources to appoint his own lawyer. The claim filed by ADF and HSLDA makes clear that in a democratic society, it is unacceptable for Sweden to force legal counsel onto a family without any objective cause to do so and to reject a defendant’s right to use the lawyer of their own choosing. For more information on this case and other ADF cases, please visit: http://www.alliancedefensefund.org.

source
Posted by pennan at 2:35 PM No comments: