Global Digital Activism to Reunite Domenic and Jonatan with their Mothers in Gotland, Sweden 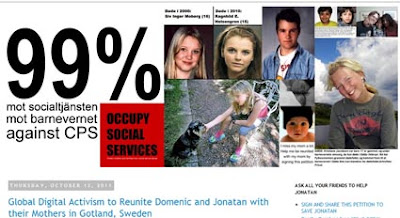 DOMENIC
The corrupt evil Gotland social service is going to move the custody of Domenic from his parents to the foster home to secure a longterm lucrative income for the foster home industry. Help return Domenic to his parents by signing and sharing this petition to all your friends:
http://www.change.org/petitions/fredrik-malmberg-we-demand-the-immediate-return-of-domenic-johansson-to-his-parents
Posted by pennan at 7:57 AM No comments: 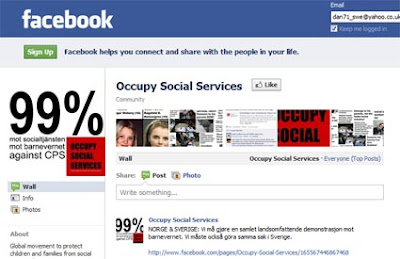 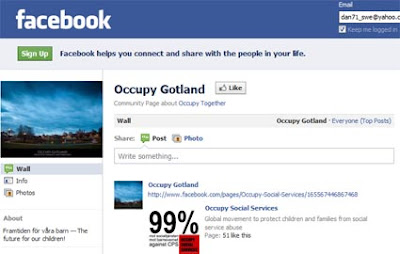 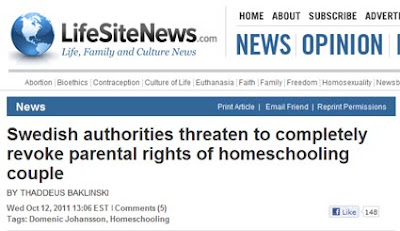 STOCKHOLM, October 12, 2011 (LifeSiteNews.com) - Swedish authorities that seized a seven-year-old boy from his family because the parents chose to homeschool him are threatening the parents with permanent loss of their child and a complete termination of their parental rights.

Swedish police snatched Domenic Johansson, son of Christer and Annie Johansson, in June 2009 from an airplane bound for India, Annie’s homeland. The main reason for the seizure was that Domenic was homeschooled. Since then Domenic’s entire family has been denied virtually any contact with their son.
Domenic Johannson with his parents.

Domenic, now 9 years old, has been held in state foster care for more than 24 months.

In June 2010, the Home School Legal Defense Association (HSLDA) and the Alliance Defense Fund (ADF) filed a joint application on behalf of the Johansson family at the European Court of Human Rights (ECHR) and have been working to support the family since shortly after Domenic’s seizure.

“The government shouldn’t abduct and imprison children simply because it doesn’t like homeschooling. That’s bad enough. But now the state is going even further by attempting to get the parents out of the way altogether,” said ADF Legal Counsel Roger Kiska. “This simply cannot stand. We will do everything in our power to help reunite this family.”

Both ADF and HSLDA are currently asking for letters to be written to Swedish officials and embassies in an attempt to renew attention to the family’s case and to encourage Swedish officials to release Domenic back to his family.

We demand the unconditional and immediate return of Domenic Johansson to his parents. 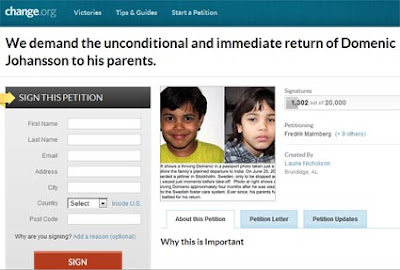 Why this is Important

“[A child] shall, wherever possible, grow up in the care and under the responsibility of his parents…” Declaration of the Rights of the Child (1959)

Christer Johansson, a Swedish citizen, and Annie Johansson, an Indian citizen, were recently informed by the Social Services in Gotland Kommun of their intention to transfer full custody of their son Domenic to a foster family. This is allegedly in the best interest of Domenic. However, Social Services have failed to demonstrate a single report of negligence or physical or emotional abuse by this family. Indeed, Social Services have engaged in an inhumane campaign of alienation: not allowing visitation or any communication between Domenic and his parents since November 2010.

Domenic Johansson has suffered physical and emotional deterioration due to the unfounded and cruelly prolonged isolation from his parents, extended family, and friends. He has not been allowed to even keep contact with other relatives and friends, in violation of the general rules outlined in Swedish law 22 § tredje stycket SoL. While in the care of Social Services, Domenic has been taken on several occasions to the hospital with stress-induced vomiting, the result of forced isolation from his biological family, which had constituted his sense of security and basic emotional identity. Domenic has both a Swedish father and an Indian mother with strong extended family ties. However, Gotland Social Services has ignored this Swedish regulation: A “[b]oard should be particularly vigilant with regard to immigrant children since many of them come from cultures where family membership has a different meaning than we are accustomed. A broken contact with family and community may at worst lead to isolation and disorientation in adulthood (Bill 1989/90: 28 p. 73).”

We demand a full investigation into the handling of this case by the Gotlands Kommun Social Services and the court appointed lawyers of Domenic Johansson (Eva Ernstson), Christer Johansson (Lars Dahlstrom) and Annie Johansson (Shantu Brahmbhatt). In direct defiance of Swedish and European Union laws, Gotland City Courts have violated the Johansson family's guaranteed rights to be represented by the lawyer of their choice. They have instead appointed lawyers with little previous experience, who uncritically accepted social services statements regarding the physical and psychological state of child and parents even though they were never corroborated by experts and who, therefore, undermined their clients’ rights to a fair trial. The system has failed this family and many others and must be changed.

We demand the immediate reunification of the family and that steps be taken to restore the emotional and psychological bond so abruptly broken by the unwarranted actions of the Social Services at Gotland Kommun. 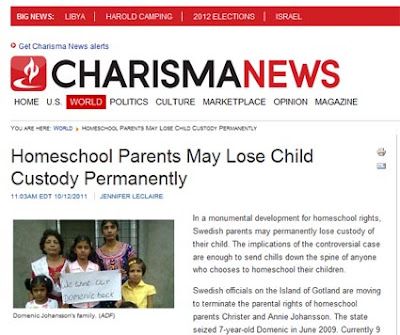 n a monumental development for homeschool rights, Swedish parents may permanently lose custody of their child. The implications of the controversial case are enough to send chills down the spine of anyone who chooses to homeschool their children.

Swedish officials on the Island of Gotland are moving to terminate the parental rights of homeschool parents Christer and Annie Johansson. The state seized 7-year-old Domenic in June 2009. Currently 9 years old, the boy has been held in state foster care for more than 24 months. Domenic’s entire family has been denied virtually any contact with him during that time.

Now, the state wants to give permanent custody to the foster family.

"The United States Supreme Court has called the termination of parental rights the family court equivalent of the death penalty," says Michael Donnelly, director of International Relations at the Home School Legal Defense Association, or HSLDA.

HSLDA and the Alliance Defense Fund (ADF) filed a joint application on behalf of the Johansson family at the European Court of Human Rights in June 2010 and have been working to support the family since shortly after Domenic's seizure. The groups are now urging supporters to write letters in hopes of renewing attention to the family's case and to encourage Swedish officials to release Domenic back to his family.

"The government shouldn't abduct and imprison children simply because it doesn't like homeschooling. That's bad enough. But now the state is going even further by attempting to get the parents out of the way altogether," says ADF legal counsel Roger Kiska. "This simply cannot stand. We will do everything in our power to help reunite this family." 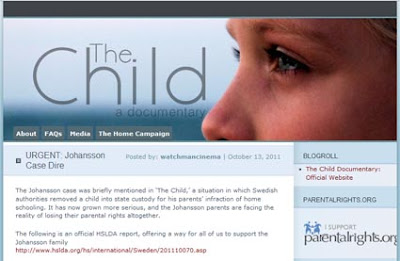 The Johansson case was briefly mentioned in ‘The Child,’ a situation in which Swedish authorities removed a child into state custody for his parents’ infraction of home schooling. It has now grown more serious, and the Johansson parents are facing the reality of losing their parental rights altogether. 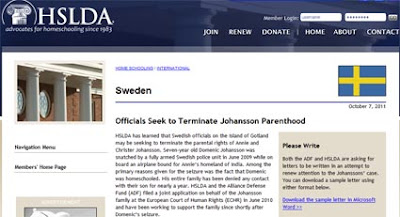 HSLDA has learned that Swedish officials on the Island of Gotland may be seeking to terminate the parental rights of Annie and Christer Johansson. Seven-year old Domenic Johansson was snatched by a fully armed Swedish police unit in June 2009 while on board an airplane bound for Annie’s homeland of India. Among the primary reasons given for the seizure was the fact that Domenic was homeschooled. His entire family has been denied any contact with their son for nearly a year. HSLDA and the Alliance Defense Fund (ADF) filed a joint application on behalf of the Johansson family at the European Court of Human Rights (ECHR) in June 2010 and have been working to support the family since shortly after Domenic’s seizure.