Socials Not Happy Family Has Gone Public
Johanssons Ask: What Would You Do For Your Children?

While employees of Gotland Social Services cloak their deeds behind a wall of secrecy, Annie and Christer Johansson have opened their entire lives to the world for scrutiny. "We have no choice. The world must know what is happening in Sweden. We've walked through fire for our son, and will continue to do so until he is returned to us," remarked Christer Johansson, as the September 2, 2010 court hearing challenging the Social's right to keep Domenic approached. "This is how much we love our son. What would you do for your children?"

This writer is not related to the Johanssons, as some would believe. As a matter of fact, until the Johansson's story became public, spreading across the globe into the United States, this writer had never heard of Domenic, Annie and Christer. Instead, this writer has become interested in the Johansson case because of her own children, a sibling group of 4, whom she and her husband adopted three years ago.

Our adopted children's birth father is in jail for 30 to 50 years for the crimes he perpetrated against these children. The initial goal for our children was reunification with their birth mother. She had never personally harmed her children. Instead, she neglected their needs by not protecting them from their birth father. Even so, Child Protective Services were prepared to reunite her with her children once she completed one demand: attendance of parenting classes. Their birth mother was not asked to walk through fire. She was simply asked to better equip herself by attending parenting classes prior to reunification.

Curiously, our children's birth mother attended all required parenting classes but the very last. For two years, while her children languished in foster care, birth mom provided every excuse as to why she could not finish the classes, fully knowing she needed to do so for reunification to take place. While their birth mother was not required to walk through fire, for some reason she chose not to complete the required parenting course in an effort to have her children restored to her. After two years of waiting, the children were made available for adoption and now reside with us, their new family.

In contrast, Annie and Christer have not been charged with any crime or neglect. They've also not been given the opportunity for reunification with Domenic. They've not been offered parenting classes as a possible means of restoration. We are certain if they were, Annie and Christer would have taken the classes expeditiously and would have been star pupils, perhaps among the best to ever pass through such classes.

Annie and Christer have stated repeatedly in court their willingness to do anything, follow any program, and agree with every suggestion from Social Services, if only their child would be restored to them. The shocking fact is: Gotland Social Services has no interest in helping the Johansson family to be reunited. The health of this family is not Social Services' goal at all.

Instead, it appears Gotland Social Services' main intention is to permanently remove Domenic from the care of his parents. Why? Of what crime have Annie and Christer been accused? They've been accused of home schooling the boy - at a time when home schooling was legal in Sweden. They've been accused of delaying or forgoing immunizations - while such a parental decision is legal in Sweden. They've been accused of neglecting two cavities in his baby (milk) teeth - yet the existence of the cavities was not known until after the Socials snatched the boy. (Incidentally, Domenic had received regular dental care in the past, thus proving his parents were not neglecting him in this area. And even had he not, has the existence of cavities in baby teeth become a crime?)

The only requirements laid upon the Johansson family by Gotland Social Services has been total and complete acquiescence to the loss of Domenic. The Johanssons have never been offered a plan for reunification.

The Johanssons refuse to acquiesce to the loss of their child. Understandably so! Domenic is their son. They've loved and tenderly cared for him his entire life. No crime was ever perpetrated against the boy by Annie and Christer, nor anyone else. The only crime this writer, and thousands of others, see is a crime perpetrated by Swedish authorities. Whether purposefully or by mistake, the separation of Domenic from his parents for the aforementioned arbitrary reasons is criminal.

It is this writer's conclusion, and that of many others, that Annie, Christer and Domenic have fallen victim to a troubling movement in the halls of child protective services worldwide. It appears in many places the priority is not the aiding of citizens, families and children who are endangered or hurt. Instead, the priority is the forming of children according to the social engineering theories of powerful entities in government. The goal is, in fact, arbitrary power and control.

When child protective services remains centered upon their mission of actually protecting children from abusive and neglectful parents - as in the case of this writer's adopted children - children and parents are justly served. However, in the case of Domenic Johansson and - troublingly - a rising number of families across the globe, when child protective services removes a child from the home of loving and capable parents for arbitrary reasons, children and their parents are permanently traumatized, neither parent nor child is served, and the freedom of society is called into question.

Source
Posted by pennan at 2:15 PM No comments: 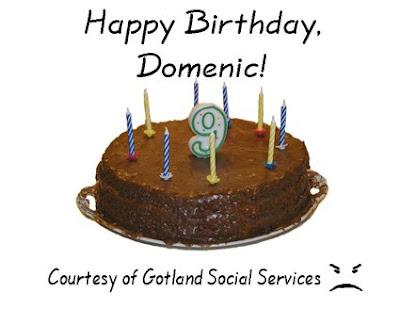 For the second time since armed Swedish police stormed an India bound airliner and violently removed then 7 year old Domenic Johansson from his parent's custody, Gotland Social Services has refused to allow the young boy a visit with his parents for his birthday on September 9th. Last year, Domenic spent his 8th birthday in the company of strangers, as he will again this year if Social Services are allowed to continue in this ruthless vein.