We've received word that Christer Johansson was released from police custody today immediately following a court hearing which was held as a continuance of the previous hearing of December 20, 2010. The original December 20th hearing was held as a result of an impulsive act on behalf of Johansson when on November 22, 2010, he took his son Domenic home, without permission, from a state supervised visit. According to Chapter 4 section 2 of the Criminal Code, this is punishable with prison for a minimum of one and maximum of ten years. Removing a child under fifteen years of age from the social services can constitute a crime against freedom or the promotion of escape and is punishable with fines or a prison sentence of up to one year.

During the December 20th hearing, the presiding judge, Lagman Mikael Mellqvist, withheld sentencing until Johansson had undergone a lengthy forensic psychological analysis. That analiysis, completed and submitted to the courts just this week, found Mr. Johansson to be psychologically sound.

Posted by pennan at 5:08 PM No comments: 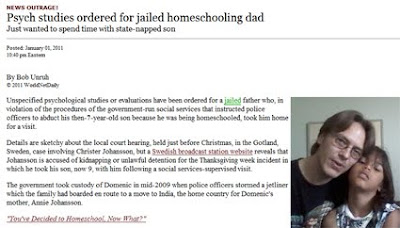 According to officials with the Home School Legal Defense Association, which is working with the Alliance Defense Fund on an appeal to the European Court of Human Rights on behalf of the family, Christer's brother also has reported Christer was moved to another prison, near Stockholm.

"He is awaiting a forensic psychological test," the e-mailed report said.

source
Posted by pennan at 2:19 PM No comments: 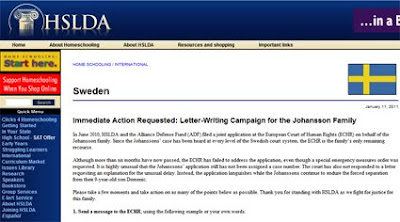 In June 2010, HSLDA and the Alliance Defense Fund (ADF) filed a joint application at the European Court of Human Rights (ECHR) on behalf of the Johansson family. Since the Johanssons’ case has been heard at every level of the Swedish court system, the ECHR is the family’s only remaining recourse.

Although more than six months have now passed, the ECHR has failed to address the application, even though a special emergency measures order was requested. It is highly unusual that the Johanssons’ application still has not been assigned a case number. The court has also not responded to a letter requesting an explanation for the unusual delay. Instead, the application languishes while the Johanssons continue to endure the forced separation from their 9-year-old son Domenic.

Please take a few moments and take action on as many of the points below as possible. Thank you for standing with HSLDA as we fight for justice for this family.

1. Send a message to the ECHR, using the following example or your own words.

I am writing in reference to the application put before the European Court of Human Rights on behalf of Christer, Annie, and Dominic Johansson from Sweden.

Although the Home School Legal Defense Association (HSLDA) and the Alliance Defense Fund (ADF) submitted this application in June 2010, I have been informed that the Court has yet to assign it a case number. Nor has the Court answered letters from the applicants inquiring why the ECHR has been so slow to respond to the application.

Justice should be swift, and this family needs your help.

The Johansson family has been denied the right to make decisions regarding their son’s education, the right to leave their country, and the right to select their own legal counsel. As a parent who enjoys the freedom to exercise my human rights, including the right of parents to direct the education of their children, the freedom of movement, the right to due process, I respectfully request that you explain why the Court has been so slow to respond to the Johansson’s application.

Mail or fax letters to:

2. Send a note of encouragement to Christer Johansson.

Persecuted homeschoolers overseas have said again and again that the support of fellow homeschoolers and families from around the world is invaluable. You can send Christer a short note of encouragement at:

3. Send a message to the Swedish judge involved in Christer’s case.

Please consider writing to the judge who is presiding over Christer's case. Suggested text from Friends of Domenic Johansson is below. Mail or email letters to:

For Your Information Only

Below is the Swedish text translated into English for you to know what you are sending. Please send the message using Swedish text and not the English text below. The below text is simply for your information.

I am extremely worried about how the Swedish authorities and courts are treating Christer Johansson and the circumstances of the forceful abduction of his son Domenic by Gotland Social Services.

When Christer decided to bring his son home on Monday, 22 November 2010, it was the action of a man who had been driven to desperation.

Christer is a loving father who could no longer bear to be apart from his only son Domenic. A son who he had only been able to see for one hour every five weeks and then always under close supervision by authorities.

Christer Johansson is not a criminal, but he has had to endure huge psychological stress and pressure for the past one and a half years, ever since the Social Services took away his son on the weakest of pretexts.

I entreat you to please respect Christer Johansson’s human rights in accordance with the European Convention on Human Rights. Please ensure that justice is served and that Christer Johansson is released without further punishment.

The family continues to be kept apart through the deplorable actions of Swedish government officials. Nine-year-old Domenic remains in state foster care, now separated from his parents Christer and Annie for over 18 months. Christer, who took Domenic home for a short but “unapproved” overnight visit in early December, is still imprisoned.