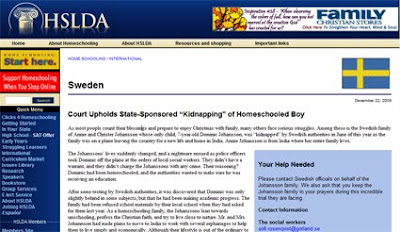 "Swedish press has reported that senior police officials in Sweden have criticized local police and social workers for their sensational actions. Press reports also suggest that the local social services may be caught in a trap of their own making. They must continue with their course of action or otherwise admit that they have disgracefully ruined a family and traumatized a child. Some Swedish newspapers also report that the pride and stereotyping exhibited by social workers in this case imply they are out to get this family."

A former Swedish social worker who spoke with HSLDA anonymously severely criticized how current social workers are treating the Johanssons.

“This case is an absolute outrage,” the former social worker said. “From the taking of the child off a plane by uniformed police officers to the absurd visitation schedule and now the complete cessation of visits. The social workers in this case are letting their pride interfere with the best interests of this little boy. In Sweden the socialist mindset of the government is that it knows what’s best for kids—better than their own parents. And in the case where a family, like the Johanssons, may do things that are different, the government intervenes.”

The social worker continued, “What is normal? In whose opinion? Why should the government get to make this decision? The boy is being taken care of and not being harmed. The family had decided to move to India where the mother is from. What is wrong with this?”
Posted by pennan at 10:20 AM