To whom do children belong - their parents or the state? 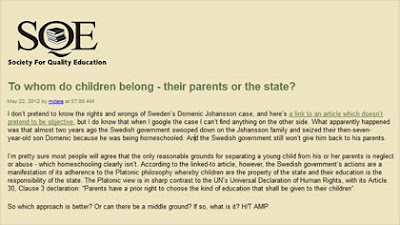 I don’t pretend to know the rights and wrongs of Sweden’s Domenic Johansson case, and here’s a link to an article which doesn’t pretend to be objective, but I do know that when I google the case I can’t find anything on the other side. What apparently happened was that almost two years ago the Swedish government swooped down on the Johansson family and seized their then-seven-year-old son Domenic because he was being homeschooled. And the Swedish government still won’t give him back to his parents.

I’m pretty sure most people will agree that the only reasonable grounds for separating a young child from his or her parents is neglect or abuse - which homeschooling clearly isn’t. According to the linked-to article, however, the Swedish government’s actions are a manifestation of its adherence to the Platonic philosophy whereby children are the property of the state and their education is the responsibility of the state. The Platonic view is in sharp contrast to the UN’s Universal Declaration of Human Rights, with its Article 30, Clause 3 declaration: “Parents have a prior right to choose the kind of education that shall be given to their children”.

So which approach is better? Or can there be a middle ground? If so, what is it? H/T AMP

Source
Posted by pennan at 1:48 PM